The calculation of covariogram for subclasses of bodies

The theory of convex bodies is a vibrant and classical field of modern mathematics. It has rich applications in various mathematical fields and in many sciences. The principles of the theory of convex bodies were established in the late 19th century by  Brunn and Minkowski. Major new results of this theory have been obtained by Aleksandrov and Pogorelov. The concept of covariogram has a great importance for investigation of bounded, convex bodies. The covariogram was introduced by French mathematician Matheron in his book on random sets (see [1]).

Examples show that convexity is essential in this characterization (see [6]). The authors of [7] present a pair of non-congruent non-convex polygons with equal covariogram. Bianchi (see [8]) found counterexamples to the covariogram conjecture in dimensions greater than or equal to 4, and a positive answer for three-dimensional polytopes (see [9]). The general three-dimensional case is still open.

The covariogram problem appear independently in other contexts. In the setting of probability theory Adler and Pyke (see [10]) asked whether the distribution of the difference X – Y of two independent random points X, Y that are uniformly distributed over D determines D up to translation or reflection.

One of the scientific goals of the research is to find the explicit form of covariogram for subclasses of bounded, convex domains: Using the explicit form of covariogram and Materon’s formula it is possible to calculate orientation-dependent chord lenght distribution and chord length distribution functions for the corresponding subclasses of bounded, convex domains.

Another scientific goal of the research is to find out does the covariogram of a convex body imply the geometric properties of the body.

I did my research in Yerevan State University from April 2014 to March 2015. During this period I have participated in the seminar "Probabilistic models and stochastic geometry" of Doctor of Physical-Mathematical Sciences Victor Ohanyan where the main aim of the project was deeply reviewed. During the research a necessary condition for orientation-dependent chord length distribution function as a function of maximal chord is obtained and formulated in an article. 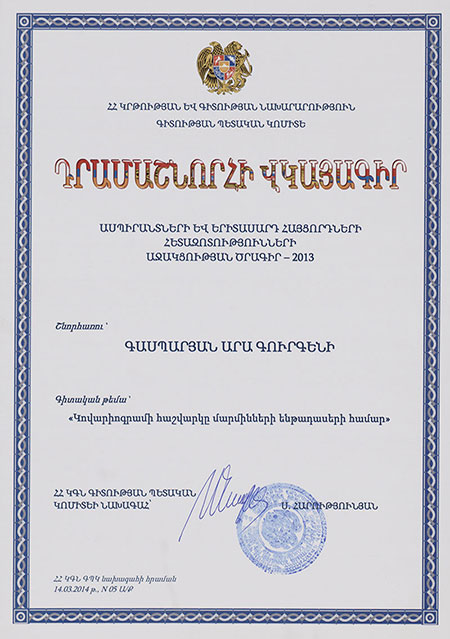